The 17th International Innovation Exhibition ARCA 2019 was held from 17th to 19th October at the National and University Library in Zagreb. This event has been recognized as an important hub where innovators, businesses, academics and practitioners, students, pupils and institutions meet to promote innovative development. Numerous innovative Croatian businesses that presented their innovations at ARCA have become successful and predominantly export-oriented market players. Many Croatian innovations were first presented at ARCA and afterwards at international shows and fairs organized by the Union of Croatian Innovators in collaboration with their partners. This enabled them to enter into domestic and foreign markets, which significantly contributed to their competitiveness and the competitive growth of the Croatian economy.
This year the international exhibition of inventions was held under the patronage of the Ministry of Science and Education, Ministry of Economy, Entrepreneurship and Crafts and the Office of the President of the Republic of Croatia. Co-organizers were the National and University Library in Zagreb, the Croatian Association of Technical Culture, the International Federation of Inventors’ Associations (IFIA), The University of Zagreb and the Nikola Tesla Innovation Centre. The co-patron was the Croatian Chamber of Economy and the general sponsor Končar – Electrical Industry Inc., while the exhibition partner was HAMAG-BICRO and Tehnix d.o.o., Bernarda d.o.o., HS Produkt d.o.o. and Zlatko Baloković Music School provided sponsorship. 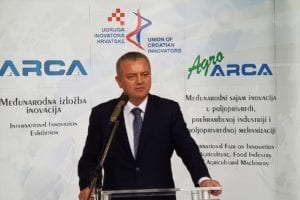 The 17th International Innovation Exhibition ARCA 2019 was opened by the Croatia’s Government Minister for the Economy, Entrepreneurship and Crafts Darko Horvat and numerous guests and speakers attended, including Bojan Jerbić, Croatian President Kolinda Grabar Kitarović’s Emissary, Indian Ambassador to the Republic of Croatia Arindam Bagchi, Vice-Director General of the National and University Library in Zagreb Tatijana Petric, PhD, Mr. Gojko Jelavić, Representative of the Croatian Chamber of Economy for the Sector of Industry, Member of the Board of HAMAG BICRO – Croatian Agency for SMEs, Innovations and Investments Mr. Ante Janko Bobetko, Representative of the Mayor of the City of Zagreb Mrs. Katarina Milković, Vice-Member of the Board of Končar- Electrical Industry Inc. Mr. Ivan Tomšić, Envoy of the Rector of the University of Zagreb Prof. Miljenko Šimpraga, PhD, President of the Croatian Association of Technical Culture Mr. Damir Tomić, PhD, and Honorary President of the Croatian Association of Technical Culture Prof. Ante Markotić, PhD, Head of the Nikola Tesla Innovation Centre Prof. Nedjeljko Perić, PhD, President of the International Federation of Inventors’ Associations (IFIA) Mr. Alireza Rastegar, Representative of International Delegations Dr. Xuan Zengpei, Secretary General of the China Association of Inventions (CAI ) and Member of the Executive Committee of IFIA, Husein Hujić, one of IFIA Directors and President of the Bosnia and Herzegovina Association of Innovators, Representative of Innovators from the Republic of Slovenia Urška Fric, Representative of Innovators from Macedonia Mirko Uzelac and President of the Union of Croatian Innovators Ivan Bračić.
Over 200 participants and innovators attended the three-day event and innovators from over 15 European and world countries presented numerous premiere solutions in the functional, design and content segments. The exhibition gathered participants from Croatia, Bosnia and Herzegovina, Serbia, Slovenia, Republic of Northern Macedonia, Czech Republic, Poland, Germany, Turkey, I.R. Iran, Egypt, Kameron, Syria, India, Indonesia and China. It is important to mention that a large number of exhibited innovations were presented by young innovators attending elementary school, high school and studying at faculties in almost all parts of Croatia.

At this year’s ARCA especially interesting was the ‘New Technologies in the Blue Sector: Green Innovations in Croatian Shipbuilding’ conference and the event program for all three days included educational workshops for elementary school students: creative and technical pop-up workshops, high school robotic workshop, a lecture and workshop for students of 1st Tesla Technical School held by a lecturer from Germany Mr. Winfried Sturm. The exhibition also included lectures by Tihomir Hodak, MSc titled ‘Intellectual Capital and its Increasing Importance for Economic Development’.
At the 17th International Innovation Exhibition ARCA 2019 awards and acknowledgments were garnered by innovations in the senior and junior categories. The ARCA 2019 Jury members were President of the Jury Zoran Barišić, Husein Huić, Ljiljana Markuš Cizelj, PhD, Rene Kajp, Krešimir Štih, Mihajlo Čizmić, Marčelo Marić and Zvonimir Vađon.
As many as 161 innovations entered the ARCA 2019, of which 35 in the junior category.
After considering all the entries and evaluating them according to the standards of excellence, their expertise and the best global practices, the Jury awarded:
• Gold Medal to 39 innovations
• Silver Medal to 24 innovations
• Bronze Medal to 47 innovations
• Special IFIA Award to
“BOX BARRIER FLOOD DEFENSE SYSTEM” presented by innovator Tomislav Pokrajčić and “ZET SMART PAYMENT SYSTEM” presented by innovators Domagoj Buban and Dr.sc. Vladimir Tudic

Every ARCA ends with the presentation of the GRAND PRIX ARCA and this year’s was no exception and at the National University Library in Zagreb the most coveted award was presented to Mario and Ivan Ljubičić, members of the Šibenik’s Faust Vrančić Association of Innovators, and their Guide B electric bicycle, also known as the ‘talking bike’, because it has an independent infotainment system enabling the transfer of tourist information without using the global platforms.