An important meeting of the African network IFIA was held in May 12,2021

The meeting was held in the presence of the IFIA President to further promote and support African inventors.

OPENING REMARK BY THE DIRECTOR

The director of IFIA African Network, MR. Michael Esuong started by welcoming every member to the meeting and thanking them for taking out time to join. He also acknowledged the presence of the IFIA president and representatives. Mr. Michael Esuong maintained that the meeting would be very interactive. The discussions will center on the collaboration of members, promotion of inventions and innovations in Africa, promotion of IFIA activities in Africa, and strategies to host the next edition of Africa Innovation Expo successfully. He urged the members to share expertise and experience to have a positive deliberation that will lead to successful implementation.

The representatives of the IFIA board Mr. Hossein Vaezi and Mr. Masoud took to the stage to introduce themselves. They expressed the pleasure of joining the first meeting of the IFIA African Network. 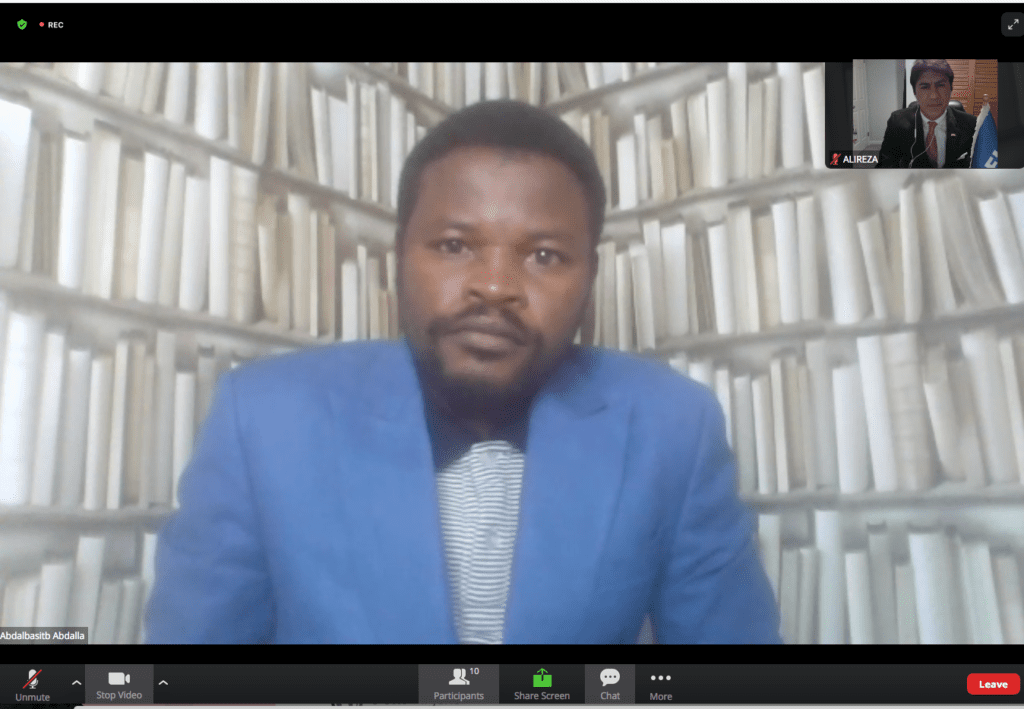 The President of IFIA, Alireza Rastegar acknowledged the effort of the African Network in calling a meeting to see the growth of the Network. He went ahead to give a little history about IFIA and how the former President established the African Network about few years ago but expressed his displeasure in the number of active members from Africa. However, he was grateful to the active countries and thanked them for their continuous progress. Mr Alireza Rastegar stated that the appointment of a new African Network director was because the former was inactive and explained that he is impressed with the successful innovation events, Mr. Michael Esuong has organized in the past.IFIA president stated that the African Network needs more activity to attract support from IFIA’s partnerships and relationships with international organizations such as United Nations, World Intellectual Property Organization (WIPO), and the African Union. He went ahead to encourage African Network to collaborate with their government agencies. He stated that he would offer any support needed for any country to connect with the government as this will help boost their progress in the quest to promote invention and innovation. The President urged the African Network to always do an annual report and send it to the IFIA office to know their progress; he also stated that he would connect with the African Union body to get support for the IFIA African Network projects.

The African Network members took turns introducing themselves and their activities relating to invention promotion in their various countries. Members present at the meeting are;

• Mahmoud Hafez (Egypt)
• Abdalbasitb (Sudan)
• Majid El Bouazzaoui (Morocco)
• Celeste – Institute of Inventors and Innovators (South Africa)
Each member expressed their gratitude for the progress of the African Network and pledged to give in their best for continuous improvement.

The IFIA Network director, Mr. Michael Esuong, emphasizes the importance of collaboration, which will help accomplish more in the Network. He also stated that members need to collaborate and share resources willingly to improve the activities of the African Network. Mr. Hafez from Egypt suggested that one of the strategies to having a healthy collaboration amongst members is communication. He also urged the IFIA body to provide administrative support that would connect every member as most of them are always busy. He went ahead to seek the contacts of every member of the African Network to ease communication. IFIA president responded by saying he will forward all the contacts to the African Director and urged him to send a message to all members to get their commitment and revert to the executive committee. He also said that any inactive member of the African Network would be assessed and, if need be, will be penalized. Mrs. Celeste, a representative of the Institute of Inventors and Innovators (South Africa), added that we should highlight four points from which we can collaborate and work on it, which will provide focus and network progress. The African Director acknowledged the suggestions and thanked everyone for their contributions.

PROMOTION OF INNOVATION AND INVENTION IN AFRICA

Mr. Michael Esuong said it is imperative to promote African invention and innovation, as the continent seems to be behind technological advancement. He acknowledged that more activities that include exhibitions, conferences, workshops, and training would help achieve this. Mr. Hafez stated the problem with inventors dealing with the progress of their patents filling as the charges tend to be very high and discourages inventors from achieving this. He also suggested financial support to inventors and connecting inventors to cheaper platforms to pay fees and file their patents. The President responded by saying he will send a letter to WIPO to support the IFIA Africa Network in their Inventors Assistant Program (IAP) thereby reducing patent fees. Mr. Majid El Bouazzaoui from Morocco suggested we commence the assessment of all African countries, this could help identify challenges and proffer key solutions. Mr. Abdalbasitb from Sudan said we could adopt a unique approach like providing scholarships for inventors as it is done in Sudan.  Mir. Michael Esuong thanked everyone for their input and said he will provide a free portal platform to the interested organizations to help host their virtual exhibition expo.

Mr. Michael Esuong stated by suggesting an increase in IFIA membership and activities in Africa by exploring African Union and universities. These entities have a significant number of interested organizations. These will help increase the number of members in the IFIA African Network.
The President stated that if we have an increased number of members and activities, support will come from top organizations. The Network will have access to various sponsoring offers from IFIA. Mr. Hafez suggested that IFIA provide inventors membership cards as practical benefits, IFIA should give discounts to African developing countries interested in joining. The President responded by saying the membership card and a good imitative, email should be sent in that regard. He instantly approved one-year free membership for African developing countries upon joining. Mr. Mausoud suggested organizing international competitions, which will help increase activities, thereby attracting members. Mr. Michael Esuong thanked everyone for their contributions and urged members to attract more members to IFIA.

Mr. Michael Esuong signified the importance of organizing an innovation expo by the African Network and said that the event would be hosted by different African counties annually. The President agreed to this idea and stated that the event should have a common name for every country hosting and urged financial support to come from all African countries to make the event a success. Every other member of the Network was happy about the idea and pledged their support to the expo success.

• IFIA President said he would ensure he brings more than four African countries to the executive committee of IFIA as he is impressed by the work so far. He said the addition would help boost the activities of the Africa network.
• Mr. Abdalbasitb suggested linking the body to the Turkish scholarship scheme as he has a strong connection with them. Mr. Michael Esuong did a recap on the discussions, and the meeting came to a close.

ACTION TO BE TAKEN