THE PRESIDENT OF IFIA APPOINTED DR. MARCELO VIVACQUA AS THE DIRECTOR OF IFIA IN LATIN AMERICA

Recently, IFIA has been going through some fundamental changes in the organization. Mr. Alireza Rastegar, the federation president, has been making these changes to deliver development in the organizational performance. Accordingly, on September 11th, IFIA president Mr.Rastegar appointed Dr.Marcelo Vivacqua as IFIA’s Director of Latin America.

Inventor, Researcher, Academic Professor Ph.D. in Biotechnology, Dr. Marcelo Vivacqua is responsible for developing treatments in the areas of non-surgical castration and cancer in mammals that earned him multiple awards at international innovations fair. 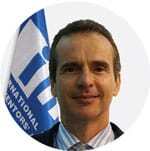 He has been a consultant in innovation and representative of various institutions and inventors in many innovation fairs in Asia, the Middle East, Europe, and the United States. He is also the founder of The Brazilian and International Innovative Inventors and Researchers Association (ABIPIR). Altogether, these responsibilities demonstrated his potentials and led him to manage and hold Brazil’s most critical innovation fair named INNOVAWORLD. Additionally, in 2015, he had a global entrepreneurship meeting for creative people born in Vitoria City, capital of Espirito Santo State in Brazil.

Nowadays, he is the Science, Technology, and Innovation Department of the Government of Espirito Santo State. Also, he is the coach of a workshop called Excellence in Smart Innovation Program. This workshop’s primary goal is to help professional inventors increase their creativity and entrepreneurship skills and contribute to forming the future generation of it. Some of the financial resources coming from this workshop get used to help Brazilian inventors who cannot afford the costs of prototyping, patent application, participating in inventions shows, etc. He has also created the Latin American Intelligence in Innovation Agency, which has the primary goal of supporting the inventors of IFIA and ABIPIR to connect themselves with investors worldwide.

After all, IFIA hopes that this choice would help the inventors and the innovation society in South America more than ever and looks forward to having Dr. Marcelo Vivacqua as IFIA’s Director of South America.