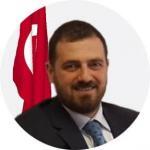 Koray Sahin graduated from Istanbul Technical University, Hotel and Tourism Management, and has put the national and international projects into effects with 24 years of experience in the sector.

He is the founder and president of ABDER (Anatolia Inventions and Inventors Association) which is founded in 2015. His aim is to support the new inventions and inventors of Turkey and promote them internationally. For this purpose he organized the first international invention event in Turkey ISIF in 2016 under the honorary patronage of Republic of Turkey Ministry of Science, Industry and Technology, under the patronage of IFIA and hosted by Turkish Patent Institute. He and his team work on ISIF’17 and further events.

Second Session of the Plenary of the IPBES

REPUBLIC OF TURKEY MINISTRY OF ENERGY AND NATURAL RESOURCES

REPUBLIC OF TURKEY MINISTRY of DEVELOPMENT

– The Institution of Providing Jobs and Employees

– Republic of Turkey Ministry of Health