General Assembly 2012 was convened on 9 November alongside the 7th International Exhibition of Inventions in Kunshan Convention & Exhibition Center, Qianjin East Rd.388, Kunshan, Jiangsu Province, China from 14:00 to 18:00. The meeting was hosted by China Association of Inventions. The main coordinator was Mr. Yang Yifeng, Department of International Cooperation, CAI and IFIA Executive Committee member.

This Agenda was unanimously approved.

1. Opening of the Session

The following delegations of IFIA full members (with voting right) were present from:

IFIA President, Mr. Vedres, asked the IFIA directors ( Husein Hujic and Adam Rylski) to seat at the presidium table. He had asked Mr. Adam Rylski to prepare  the Minutes of GA.

IFIA President and delegates provided reports about their activities from the last General Assembly organized in 2010.

This report  was unanimously approved.

Remark: The Hungarian governmental guarantee concerning to annual support for the IFIA Office was presented on the last IFIA GA by Mr. Janos Latorcai (Vice President of the Hungarian Parliament) before the election of Mr. Vedres. This financial support (10 million HUF/year) was not granted. The costs of the IFIA Office in Budapest is paid by the IFIA President.

The balance sheets were approved by the ExCo. The financial report was unanimously approved.

The first IFIA event in 2013 be on February 2 – 7 in IRAN. The applications concerning to the IFIA event status (criteria: free booth and other supports for IFIA members) must be sent until  January 31, 2013 to the IFIA Office. The IFIA ExCo will accept the applications which will be published on the IFIA web until February 20, 2013. This Plans and Policy  was unanimously approved.

The majority of members has not paid their member fee. The GA requests the IFIA members to settle their debts which was unanimously approved. 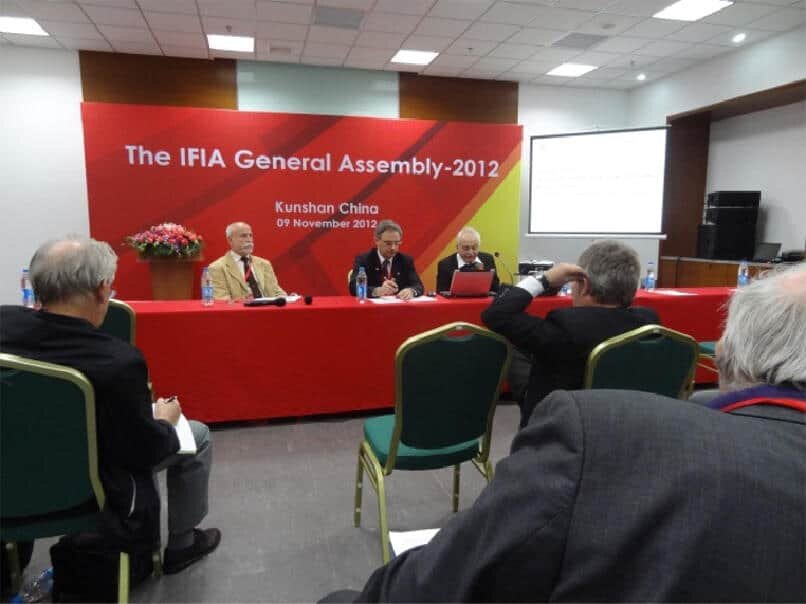