IFIA International Order of Merit of the Inventors

The International Order of Merit of the Inventors – IOMI is an international civil decoration of inventors and their supporters that is awarded for exceptionally meritorious conduct in the performance of outstanding invention activity, services, and achievements.

The motto of the IOMI is: “INVENT AND SERVE”.

IOMI was established by the President of the International Federation of Inventors’ Associations on 15th January 2008.

The Knight must be the inventor (who has patented invention and/or patent application) and he/she has minimum of ten patented inventions or he/she has an invention which has been awarded by minimum tree international invention forums. Moreover, his/her invention shall not be harmful to the environment based on a proposal prepared by an adequate IFIA member organization. The Knight is a member of the Chapter of the IOMI.

The Officer must be the inventor who represents and helps inventors. Moreover, he/she contributes to the appreciation of inventors at national and international levels, based on a proposal prepared by an IFIA ExCo member. The Officer is a member of the Grand Chapter of the IOMI. Upgrading of a knight to officer degree is possible. 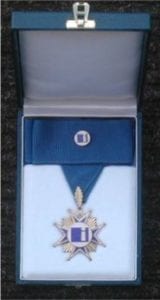 The Commander must be a well-known person who represents invention and the inventor movement. Moreover, he/she contributes to the enhanced appreciation of inventors at national and international levels, based on a proposal prepared by a majority of IFIA ExCo members. The Commander is a member of the Grand Chapter of the IOMI.

The Chapter is the assembly of the knights, officers, and commanders, which is an ethical community. The Grand Chapter consists of officers and commanders. This is a body, which is the ethical court of IOMI, competent to exclude a member. The Chairman of chapters is the Grand Master.

The award ceremony must be a ceremonial public event connected to an international inventor exhibition or conference.