The First Institute of Canadian Inventors (FICI) Report in 2019 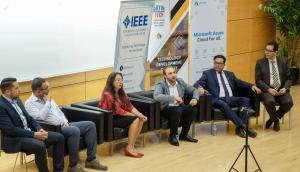 The First Institute of Canadian Inventors (FICI) is the official representative of the IFIA in Canada. FICI is running by Babak Khodaparast and it has more than 5 student chapters, Canada wide with more than 900 members.
Following is part of the FICI activities since January 2019:
On March 17th the First Institute of Canadian Inventors with the sponsorship of Ridout&Maybee LLP and Women in Tech Engineering of IEEE organized an International competition of Cleantech, high tech and smart cities at the Toronto Reference Library, in Downtown Toronto. In this competition, applicants submitted their inventions from different countries, including Canada and seven inventions, and startups reached the final stage. Two startups had their pitch in front of juries, and the winner won $5000 from Ridout&Maybee Law firm for their Intellectual Property with a special award from FICI.
The next competition of FICI will be in the winter 2021 in Toronto with more focus on Canadian and International startups in the field of AI, Cleantech, tourism and smart cities.
Babak Khodaparast, president of the First Institute of Canadian Inventors (FICI), participated in the OCE 2019 on May 7th as the official representative of IFIA in Canada, to increase awareness about IFIA and how this organization can support national and international inventors.
Named Canada’s Best Expo in 2010, 2011, 2016, 2017 and 2018 and commending 14 years of strong, new thoughts, OCE’s Revelation is Canada’s chief development feature. It unites the best and most brilliant personalities in the industry, the scholarly community, venture and government to grandstand driving edge innovations, best practices, and research in the territories of vitality, fin-tech, clean tech, nature, propelled well being, computerized media, data and correspondence advances and propelled fabricating. The yearly meeting and grandstand pulls more than 3,600 participants and more than 500 exhibitors.

Revelation’s 200,000-square-foot show floor highlights exhibitors from a wide scope of tech and business segments, just as educational and charming board exchanges with nearby and worldwide industry specialists. Features of the meeting this year are a considerable lot of the present developing innovation patterns, including 5G systems, associated and self-governing vehicles, space investigation tech, and propelled producing. The show floor will likewise highlight entrancing modern innovation in the WOW Zone, just as the most recent in social insurance tech, cleantech, computerized reasoning (artificial intelligence), increased/augmented experience (AR/VR), and that’s only the tip of the iceberg. Canada’s driving development gathering, and public expo will likewise hold the Pitch rivalry, highlighting twenty of Ontario’s most splendid secondary school business people.
On June 15th, FICI Co-Organized “Conference on AI Applications Today” with PITON and sponsorship of big companies such as Microsoft and in partnership of Ryerson University, IEEE and Humber college. We had more than 100 university professors, students and experts in the field of AI.
Last but not least, recently, Babak Khodaparast offered their award on behalf of the FICI after Amazon Company at the final stage of startup competitions on Elevate 2019. Elevate Tech Conference in Toronto features guest speakers such as Chris Hadfield, Michelle Obama, Akon, Martha Stewart and more. The Elevate Conference is a Canadian event that brings together innovators from around the world to discuss world issues and have interactive experiences with the audience. This year Elevate Conference had more than 500 organizations and 10,000 visitors.