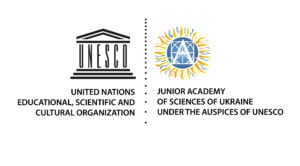 About JAS of Ukraine:

The Junior Academy of Sciences of Ukraine

The Junior Academy of Sciences (JAS, the Academy) of Ukraine is an educational system that aims at providing the organization and coordination of students’ research activities, creating conditions for their intellectual and creative development, spiritual advance, and vocational self-determination to support the scientific potential growth of the country.

Founded nearly 70 years ago, the Academy passed through several stages of its formation and development. The precondition for the extracurricular education entity to be launched was the organization of the extracurricular education institutions’ scientific student clusters the network of which was formed in the 1920s–1940s. According to the USSR Academy of Sciences’ request to strengthen patronage over the children’s scientific organizations in 1939, there was adopted the Resolution on Patronage over the Kyiv Palace of Pioneers Concerning the Work with Talented Children and Youth, so that the scientific clusters got to work in most Ukrainian large cities during next 10 years. Later on, the separate clusters and sections join the students’ scientific societies. Thus, in 1947 there was launched the Science and Technology Students’ Society on the Kyiv Palace of Pioneers base, with the first students’ theoretical and practical conference held in Kyiv in 1950. The first mass scientific entity was the Junior Academy of Sciences of Crimea named “Iskatel’” (“seeker” in English) and established in 1963, this experience became the basis to finding Junior academies of sciences in different Ukrainian regions in the 1960s-1980s.

JASU activity is aimed at science education development, especially in STEM fields, in Ukraine and all over the world according to the 4th goal of SDG “Quality education”, joining new networks of scientific, educational, and innovative institutions is vital for creating and developing new opportunities for young scientists and innovators.

UNESCO Centre “Junior Academy of Science of Ukraine” (JASU) is a governmental scientific and educational organization, working as the extracurricular centre for middle and high school-aged students and teachers gathering around 250,000 of Ukrainian school students engaged in science and research activities. JASU is the 2nd category centre of UNESCO for development science education in the world according to the 4th Goal of SDG “Quality education”. JASU is well recognizable educational provider both in Ukraine and abroad and is a prominent partner for international cooperation and joint projects.

Public well-being through the involvement of individuals in a science activity.

As the main promoter of science education in Ukraine, JASU organizes, maintains, and develops plenty of various extracurricular activities both for school students and for educators. For instance, Ukrainian Scientific Project Competition for School Students annually unites more than 100,000 of school students engaged in scientific and research activity; Innovative Expo “Future of Ukraine” presents around 100 of unique and innovative developments to identify best young innovators within 7 modern majors; MANLab is the largest cross-disciplinary laboratory for schools students in Ukraine; Laboratory of Experimental Research Ex Lab is the permanent science-oriented laboratory in chemistry, biology, IT and robotics; Summer Schools in various majors; UF Inсubator is a modern platform to transform innovative activities of young entrepreneurs into mature business models; Children’s Academy “Futurum” provides for an initial phase of science education among children of 6-13 y.o.; National Final of the “Destination Imagination” Program is a licensed program of Olympiad in Creativity “Destination Imagination”; Activities for Educators.