IFIA Memorial Medal Awarded to the Minister of Syrian

During the exhibition, Mr. Masoud Tajbakhsh paid a visit to the Ministry of Interior trade and consumer consumption to have a meeting with Dr.Atef Al-Naddaf, the Minister of Interior trade and consumer consumption in Syria,  in order to deliver  IFIA president’s massage which admired both the intellectual and financial support of the Syrian government for having successfully organized the Albasel exhibition during the past nineteen editions and awarded IFIA’s Memorial Medal to Dr.Atef Al-Naddaf. 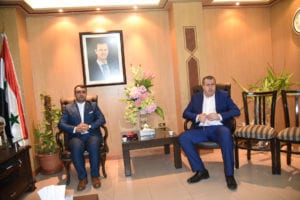 The main message was that “time is ripe to focus on the commercialization of innovative technologies developed by either the scientific academic sections of Syria or even the independent inventors in order to ensure the prosperity of the nation”.

Dr.AL-Naddaf expressed his appreciation to IFIA as an organisation contributing to achieving Syria’s objectives defined in vision 2021.

the Ministry of Interior trade and consumer consumption with the cooperation of IFIA in Syria has played a major role in the promotion of culture of invention and innovation, and also encouraging the kids, women and young people to engage in innovative activities which have helped profoundly in economic and scientific prosperity.

The minister also expressed his enthusiasm for cooperating with IFIA in such areas as, commercialization, Green Inventions and technology transfer.