An international Symposium on “the commercialization of inventions in the global market” was held from December 4 to 7, 2002 in Seoul. It was jointly organized by the World Intellectual Property Organization (WIPO) and International Federation of Inventors’ Associations (IFIA) with the cooperation of the Korean Intellectual Property Office (KIPO) and the Korean Invention Promotion Association (KIPA).

Seven topics were examined during the event, namely: 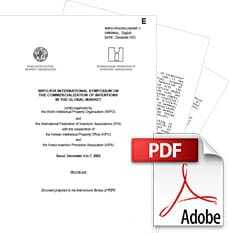