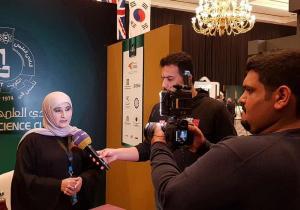 This unique convention in the Middle East was received with great importance locally, regionally, and internationally. It highlighted the inventions, innovations, and creativity of youths and Universities. The convention also promoted Kuwait’s modernity and its role in encouraging and supporting the inventors and participants in this public service.

The 12th IIFME brought 42 different countries together including the United Kingdom, USA, Switzerland, Sweden, Spain, Thailand, Egypt, Syria, Lebanon, Oman, Qatar, Iran, Iraq, Kuwait, Algeria, Tunisia, Bahrain, etc.  A total of 130 inventions were showcased during the exhibition and 45000 visitors paid a visit to the event during the opening hours.

The Kuwait Science Club awarded Gold, Silver, and Bronze Medals as well as 50,000 $ cash prize to the inventors selected by the juries. Also, IFIA, UNESCO, WIPO, and GCCPO awards were also given to the best inventions in specific categories.

During this year’s exhibition, the Second International Seminar called “From Invention to Market” was organized by the Kuwait Science Club in the Kuwait Chamber of Commerce & Industry. The main point of

the IFIA president in his speech was about the best way to succeed in commercializing inventions.  He said the best solution is to follow your innovative goals by gathering valued teammates.

Moreover, Mr. Marco Aleman the Director Patent Law Division of the World Intellectual Property Organization had a lecture about the Patent System as a Mechanism to Promote Innovation and Transfer of Technologies.

Dr. Salam Alablani (Director of the scientific culture directorate Kuwait foundation for the advancement of science) and Mr.David Taji (Jury President of the International Exhibition of inventions of Geneva) were other keynote speakers of this seminar.