The president of The International Federation of Inventors’ Associations, Mr. Alireza Rastegar, has recently been applying underlying changes to the staff of IFIA to make progress in the organizational performance. On August 28th, Mr. President appointed Mr. Masoud Tajbakhsh as the new Special Assistant of the President of IFIA. 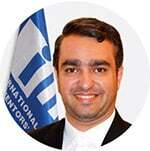 Masoud Tajbakhsh is an international expert in the fields of invention and innovation, and based on his distinguished background, he is a researcher, lecturer, and professionalist in these fields. Because of his research-oriented and educational efforts, Masoud Tajbakhsh has regularly attended several international invention exhibitions, university seminars, and innovation affairs for the last 13 years in more than thirty countries in the world such as Switzerland, Canada, Germany, South Korea, Croatia, Italy, Cyprus, and the Persian-Gulf States.

During all these years that he has been involved with the invention and innovation society, Masoud Tajbakhsh has been the Academic Section Coordinator of IFIA for more than five years. He has tried his best to advance and promote the culture of invention and innovation for the time being. He has made many operational efforts such as attending conferences and festivals to transmit the message of the president of IFIA, holding hours of discussions about the development of innovation and creativity, and going to more than twenty international countries to attend meetings improving the innovation world.

Moreover, as the Academic Section Coordinator of the International Federation of Inventors’ Associations in Geneva, and as a professional innovation consulter, Masoud Tajbakhsh has made a very positive contribution toward the success of some knowledge-based groups. He has been invited by universities, summits, and congresses to deliver a professional speech in the invention and innovation fields.

Besides, he has authored several articles and books on the challenges and opportunities of inventions and innovation. He has tried to develop a culture of creativity and innovation among young students all around the world.

In conclusion, IFIA hopes that this choice would help the inventors and the innovation society more than ever and looks forward to having Mr. Tajbakhsh as The Special Assistant of the president of IFIA.