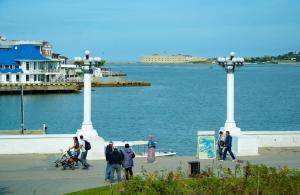 Salon “New Time” is one of  the IFIA events and exhibitions projects for the year 2019. Leading innovative organizations, companies and firms from 28 countries took part in the Salon’s work.

While summing up the results of the XIV International Contest of Youth’s Innovations and Works “New Time”, more than 80 schoolchildren and students works from 8 countries were awarded Salon’s diplomas, medals and prizes.

350 inventions and innovative projects was demonstrated.  285 medals (gold, silver, bronze ones), 80 Diplomas of Honor and more than 40 cups and other awards were presented.

Number of visitors in this year NEW TIME amounted to more than 2000 persons and 2 Cups of IFIA were awarded to the selected inventors, among the 40 awards of the Salon.

The first IFIA cup awarded to A. Maltsev, A. Krasnov, P. Salikhanov, A. Beliaev, V. Peshehodov and A. Kluchnikov for the invention “Method of Production of weather-resistant steel” and the second IFIA cup awarded to V. Goch and Ya. Ibadov for the invention“Harmonizer with pictographic composition to improve the functional state of biological objects”

The organizing Committee decided to prolongate this project and organize  16th international Salon of Inventions and New Technologies “New Time” on September 24-26, 2020 in Sevastopol and open work  for preparation 16th International Contest of Youth’s Innovations and Works “New Time” as a part of Salon “New Time”.