According to the IFIA statute, IFIA members can send their applications for the IFIA Executive Committee candidates covering the period 2020-2022 to the IFIA Secretariat in an official letter signed by the President of the Association. 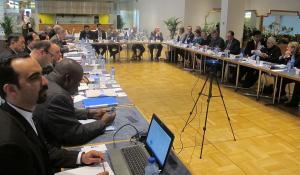 IFIA Executive Committee members that consist of up to one-third of IFIA full members are elected by General Assembly for two years. They ensure that the decisions of the General Assembly are carried out within the means of IFIA, are responsible for the operation of any further committees and working parties of IFIA, and examine applications for membership to the various membership grades.

Also, the Executive Committee shall meet in extraordinary session upon convocation of the President, either on his own initiative or at the request of over a half of the Committee’s members.

According to the statutory laws, the elected members shall work voluntarily.


1. In addition to the President, the Executive Committee shall consist of up to one-third of the full members of IFIA. The members of the Executive Committee will be elected by the General Assembly for two years (until the next ordinary session of the General Assembly). These shall represent equitably the different regions of the world, and not be more than one from each country.

2. The Executive Committee may, on the initiative of the President, reach decisions by correspondence.

3. The Executive Committee shall make its decisions by a simple majority of the votes cast. A quorum of one-third is, however, necessary.

4. The Executive Committee will ensure that the decisions of the General Assembly are carried out within the means of IFIA; will be responsible for the operation of any further committees and working bodies of IFIA; will examine applications for membership to the various membership grades.

6. The Executive Committee members work on a volunteer basis with no remuneration.

Please note that IFIA members must send their candidate’s requests via email till 30 April 2020 only to the IFIA Secretariat to the following email:

Due to the request of IFIA members and the reason for the spread of Coronavirus, the deadline for submitting candidates for the IFIA Executive Committee Members 2020-2022 has been extended until the end of May 2020.