Around 12,300 visitors came to the iENA 2019 international trade fair for “Ideas — Inventions — New Products” at the Nuremberg Exhibition Center. On the two trade-visitor days, international business people, scouts and investors were in attendance, meaning many exhibitors were able to make useful contacts and can expect good follow-up business. In some cases, concrete deals were already concluded at the fair. 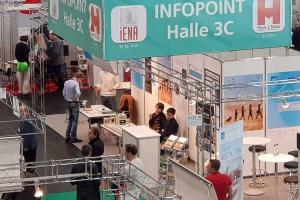 Trade visitors praised the quality of the exhibits presented. Many innovations focused on sustainability and environmental protection and thus captured today’s zeitgeist. The media interest in the iENA and its inventors was again huge: both national radio stations and daily newspapers reported on it from Nuremberg, as well as international media, for instance from Angola, Croatia, Luxembourg and Sweden.

Its significance as an innovation platform is becoming increasingly important for inventors, because in addition to its function as a trade fair, the iENA is also an important networking platform for innovators from all over the world. On the two public days, visitors from the Consumenta, a consumer fair running in parallel, also come to the iENA and view the innovations from a consumer’s point of view.

The international exhibitors traveled  to the iENA in Nuremberg from 30 different countries. Both long-standing exhibitors from Angola, Austria, China, Taiwan and Thailand, as well as new attendees from Hong Kong and Vietnam, drew a positive balance after four days of the fair. This year Croatia was the partner of the 2019 iENA.

In the iENA’s daily stage programs, topical issues for inventors, start-ups, entrepreneurs and drivers of innovation were discussed. Particularly well attended were the lively panel discussion on China’s innovation policies in comparison to Europe and the iENA symposium entitled “Good ideas, and then what?”, as well as the presentation of the state and national “Jugend forscht” winners in the field of technology. The range of information that iENA offers was expanded by the participation of national and international inventor associations and organizations, which support development from initial idea to market readiness.

The Innovation Congress on a growth course
Around 120 participants — that is significantly more than in the previous year — attended the 2019 Innovation Congress, which was held under the motto “Successfully managing innovations”. Speakers from science and industry attended from various sectors and provided an absorbing congress that was

rich in variety. Participants showed great interest and useful discussion groups formed after the presentations. A tour of the iENA inventors’ fair rounded off the congress for the attendees.

The next iENA will take place from the 29th of October to the 1st of November 2020 in Hall 3C of the Nuremberg Exhibition Center.

Further information is available at: www.iena.de