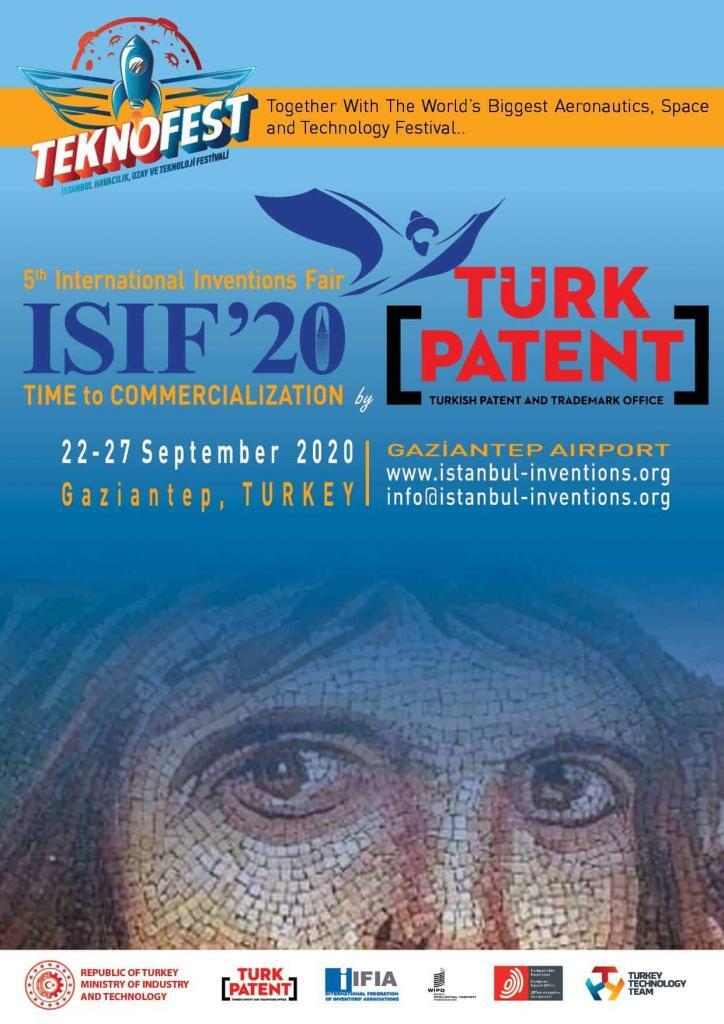 INTERNATIONAL INVENTIONS FAIR (ISIF) IS GETTING PREPARED TO OPEN ITS DOORS TO THE WORLD’S INNOVATIVE MINDS FOR THE FIFTH TIME….

Exceptional city, İstanbul; which brings together the continents and civilizations; accomplished its duty to gather the inventors and investors from various parts of the world successfully last four years.  Now the time for our ancient civilization and industrial city, GAZİANTEP.

We would like to inform you that, 5th International Inventions Fair – ISIF’20 will be held on 22-27 September 2020 at Gaziantep / TURKEY, with the Honorary Patronage of Republic of Turkey Ministry of Industry and Technology, hosted by Turkish Patent and Trademark Office (TÜRKPATENT). Also, it will be held under the international patronage of the International Federation of Inventors’ Association (IFIA), organized by the Anatolia Inventions and Inventors Association, supported by the World Intellectual Property Organization (WIPO) and European Patent Office(EPO).

ISIF, which has won the title of being the most visited international inventions fair in the world in 2019 with 1.720.000 visitors, has set off with the target of more than 2 million visitors this year.

ISIF will be held simultaneously with TEKNOFEST, the world’s biggest space, aviation, and technology festival and will continue to contribute to the promotion of inventions, meeting with investors and commercializing them more strong. ISIF is also; is a social activity candidate to be;

* an awareness organization which shall be colored by the attendance of people from all ages,

* an extensive cultural organization which shall gain value with the national and international workshops, and

* a social organization to be the most powerful industrial property network of Turkey.

As this positive initiative, which we initiated in 2016 has created tremendous impression not only in our country but all around the world, the accuracy and necessity of the work what we have been doing are hereby verified obviously. However, we feel strongly the responsibility to accomplish better than the previous year every time. For this reason, ISIF’20 shall be a more colorful, enthusiastic and effective fair where new bricks are added over ISIF’16, ISIF’17, ISIF’18, and ISIF’19 and new components are included. In addition to the normal activities of ISIF, technology competitions (with prize money) and the “takeoff” entrepreneurship summit will also enrich the event.

We; Anatolia Inventions and Inventors Association(ABDER), hereby express our gratitude to all our stakeholders who provided a contribution to this event which has been perfectly fictionalized and having various components that engage and supplement each other.