The Innovation Week in Africa IWA 2019 event received more than 360 projects from more than 40 countries. Among these projects, 132 inventions and innovations from 31 countries were filtered out and selected to be presented at the IWA 2019 expo which took place in Rabat, Morocco from December 11 to 15, 2019 at the new Rabat-Agdal Railway station with local support from SQLI Morocco , CGEM regional office and the Moroccan government, in particular through the ONCF  and the Wilaya of the Rabat-Sale-Kenitra region.

The Grand Prize was awarded to Morocco represented by the Moroccan School of Engineering Sciences (EMSI), and it corresponds to the best invention for the whole competition which includes all the 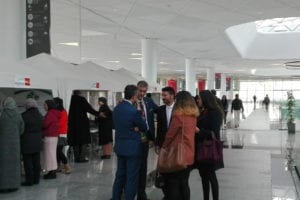 inventions and innovations presented at the show; The Semi-Grand Prize was awarded to China represented by “Shen Yang R. Y. L. T. Energy Technology Co. LTD and Northeastern University”, and is the second best invention for the entire competition.

In addition, several personalities have also been distinguished by the “Outstanding International Achievements” prize, including:

At the same time, on December 14, the great hall of the Wilaya of Rabat housed a presentation given by Mr. Winfried STRUM, for the benefit of students from schools on both sides of Bouregreg river, who expressed their interest and responded in large numbers. This professor, who came specially to make young people aware of the invention, was elected best Professor in Germany in 2004 and is recognized internationally for his presentations to young people to inspire and initiate them to innovation, thanks in particular to magic and illusion tricks.