The National Association for Science and Research (NASR) which is chosen as a focal point for IFIA in the Middle East, has represented Lebanon in many international fairs and shows. Many inventors from different Educational Institutions have participated in those fairs. In addition, IFIA FPME is coordinating with Inventors’ Associations in the Middle East. IFIA FPME congratulates Eng. Ahmed Majan for his new position as the president of the newly established UAE Inventors Society, and it is now cooperating with Eliaa Foundation from Saudi Arabia helping them in organizing an IFIA event.

In addition to the internati 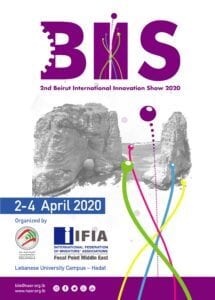 onal activities, IFIA FPME organizes each year a science fair for school students, to guide them toward innovation and research. This year Mobarat Eloloum 2020 will take part in the Lebanese University – Hadath between 2 and 4 April 2020 and all the details can be retrieved from the website www.nasr.org.lb/.

In parallel with the annual Science Fair, IFIA FPME is organizing for the second time Beirut International Innovation Show (BIIS 2020) which will take place at the Lebanese University Campus, Hadat. BIIS is an Innovation show where inventors from all over the world are welcome to showcase their innovations and interact with Lebanese and international innovators, and it aims to become a global leading venue for Innovators, Inventors and Investors with a strong emphasis on Technology Transfer and Research Valorization.

At the Istanbul International Exhibition for Inventions, Research and Development, which took place from 17 to 21 September 2019 with the participation of 23 countries and hundreds of inventions, Lebanon participated in a delegation of four inventions, under the lead of NASR president Mr. Radwan Chouaib. 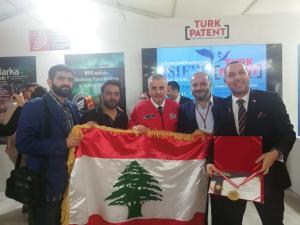 Mr. Habib ElKak also won a gold medal for his invention “The Drone-Mounted Telescope”, in addition to the Egyptian inventors Association award and a medal from the Forum of the Roman Inventors.

The silver medal has been won by the inventor Mr. Ahmed Al Masri from the official Raml Al Zarif Mixed School for his invention “Educational X-Box”.

In Qatar, the young innovator Asma Sarhan has won the gold medal of the Health category at Doha Innovation Oasis for her invention “Salamati”.

This exhibition was held from September 14 to 20, 2019, and was organized by the Ministry of Culture and Sports in cooperation with the Forum of Islamic Cooperation Youth, as part of the Doha Youth Capital 2019. 45 innovations from 33 different countries participated and Asma was the only one who represented Lebanon.

iENA 2019 was held from October 30 to November 3, 2019. Nearly 800 inventions from 32 countries around the world, especially industrialized countries have participated in this version of the expo, and less than the third of the inventions won medals. The Lebanese booth had a special attention, where he was visited by the President of IFIA, the President of the German Inventors Association, and the President of the European Inventors Association, as well as many heads of delegations, visitors, and interested people who expressed their admiration in the level of the Lebanese inventors. The President of the exhibition also singled out the Lebanese delegation for its professionalism on the stage at the beginning of the closing ceremony in German and English. 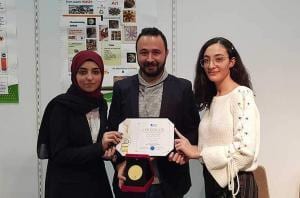 The silver medal and the Russian Ministry of Science and Technology Award have been won by “Smart Green House” the invention of Lara Skaiki, Mohamed Taleb, and William Salame under the supervision of Mr. Antoine Abi Tayeh from “Cadmous College”.

In addition, in iENA 2019 many prizes have been given to other inventions from different countries like Saudi Arabia, Russia. Two prizes were presented on stage, one in the name of NASR and was awarded by MS Ninette Kamel and Mr. Mohamad Koubeissy to Dr. Hamidollad Afrasiabian and Mr.Vahid Afrasiabian for their invention “Herbal compound extract for the resolving inflammation and treatment fatty liver by Nanomedicine technology”, the other in the name of IFIA FPME and was awarded by Mr. Chouaib to Nikitin Alexey and Alekhin Alexandr for their invention “Technology of tension-free hernioplasty”.