Young inventors always play a big role at the iENA. Every year students show an enormously high innovation potential and inspire visitors and representatives of the economy.

“Jugend forscht” encourages and supports young people in science, technology, engineering and mathematics (STEM). The contest seeks to inspire talented achievers and to help them with their careers. “Jugend forscht” holds more than 110 competitions throughout Germany every year in order to arouse the interest of children and young people for STEM subjects and to discover and promote talents in a targeted way at an early stage. 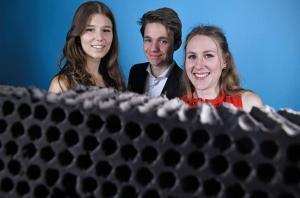 The disposal of waste is a problem in space missions. So far, the waste generated on the International Space Station (ISS), for example, has been disposed of by burning it in the Earth’s atmosphere. The inventors Adrian Schorowsky (18), Leni Termann (18) and Lara Neubert (18) from Rostock developed the idea to melt plastics on board the station in order to produce new material – the so called filament – as a raw material for use in 3D printers. 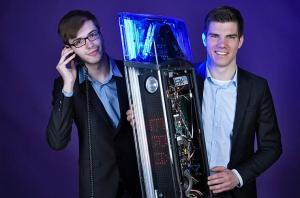 The “Jugend forscht” inventors, Jan-Hendrik Pielke (19) and Christian Sadowski (19), from Rheine want to make it possible for the drivers of emergency vehicles with their Emergency Radio Assistant (ERA) to direct car traffic as needed in the event of accidents. They can make individual or programmed announcements to drivers via VHF and traffic radio. 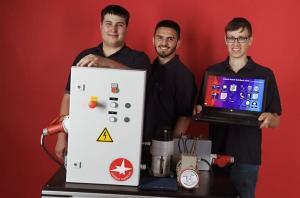 A magnetic board with hundreds of information plates – this is confusing and, in view of the digitalization for work planning, no longer up to date, Simon Niedt de Matos (18) and Philipp Hohner (18) from Bamberg found. They therefore programmed the Total Organisation Manager TOM. The central control element is a large touch screen. Via an RFID card reader, the users can identify themselves, log in and carry out further registrations.

For more than 20 years now the enterprise Pfleiderer has supported the “Jugend forscht” regional competition in Upper Palatinate. Right from the start the enterprise gives its trainees the opportunity of taking part in the competition. Here very practical ideas from the work environment of the young people flow into the competition. The job starters learn to develop their products independently from the idea to its implementation – this promotes important key qualifications such as team spirit, decision-making ability and responsibility, which are crucial for professional life. 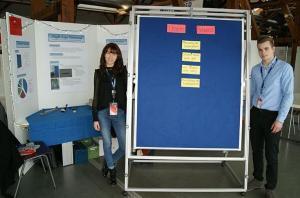 The young inventors Sophie Spangler (17) and Dominik Puff (19) from Pfleiderer planned and built an ergonomic and sturdy pinboard which doesn’t constitute a tripping hazard in a typical working day and thus makes working in the office safer. It involves a fully equipped pinboard which is easily transportable. The board is also pivot-mounted and height-adjustable. In addition, it is equipped with a pin and pen holder. 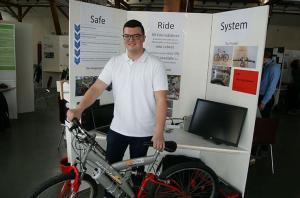 Also taking part was a budding electronics engineer for industrial engineering, Johannes Regnath (17). He exhibited his Save Ride System, a device attached to bikes which can detect a crash and send a message to anyone, or the emergency services.

This is a competition where teams of students (grades 5-12) work on an individual project in science, technology or engineering during the whole school year together with their teachers. At the beginning, the students of each team choose a topic which they think is interesting and innovative. Besides they find a company partner to support them realizing their idea, maybe together with apprentices. The students make experiments, write a documentation, experience team work and finally present their project at the end of the school year. A jury rates each project according to given criteria.

Vision-Ing21 is organized by Förderkreis Ingenieurstudium e.V., a non-profit organization whose aim is to raise and increase interest and enthusiasm for sciences. It is supported particularly by Continental AG, Siemens AG and the Technical Faculty of Friedrich-Alexander-University of Erlangen-Nuremberg.