During IFIA International Conference organized in London in 1968 the Governing Bodies were elected and IFIA Statutes was formulated.

The name of the present associations and their representatives are given in the following PDF. Mr. A. W. Richardson was elected as chairman of the conference and the representatives from each country gave a short summary of inventor situation in their country. In addition, a brief explanation of draft statutes, official publication, final date of financial year, officers of General Assembly, Location of Secretariat, and the location of the next annual meeting is presented. 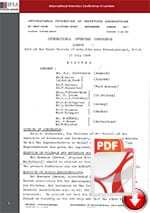