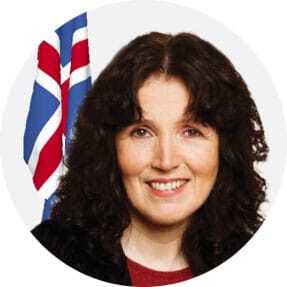 The founder and president for the Icelandic Women Inventors and Innovators Network (www.kvenn.org) ,  Elinora Inga Sigurdardottir was graduated with a B.Sc. degree in 1982. She has worked as a chemical analyst at the University in Iceland.

She has also been a nurse since 1986 working in several hospitals in Iceland and Sweden while having teaching experience since 1994.

In December 2007, she received a diploma in coaching and mentoring from the Swedish inventors association. In addition, she was conferred the diploma of innovation consult by Mälardalens University in June 2012.

Elinora Inga Sigurdardottir has been in the administration for QUIN which is a network of women inventors in the Nordic and Baltic countries organizing and designing a website for QUIN where women could advertise their products and get in contact with other inventive women.

Since 2008, she has been producing a TV program called Frumkvöðlar (Innovators) at the TV channel ÍNN, where she talks to people who have new products going on. This program is on the air once a week. Www.inntv.is
She has given several lectures about innovation, networking and importance of role models in the international conferences.

In September 2011, she planned a EUWIIN conference and exhibition in Reykjavik, Iceland for women from 8 countries www.gwiin.com , a European Women Inventors and Innovators Network nominating over 40 Icelandic women to EUWIIN award, for their innovation. She has planned several exhibitions and seminars for women inventors in different parts of the world.

At last but not least, she is an inventor and runs her own business. Her product is a dried fish skin as a chew treatment for dogs. She has registered trademark Elinora´s Royal Natural Snack, and has used her website www.royalnatural.com  to market her product with good results.  She was awarded special prize by GWIIN in London in April 2003.