International Federation of Inventors Associations is a nonprofit organization aiming to disseminate the culture of invention and innovation support inventors transfer technology and establish cooperation with the related organizations.

IFIA cooperates closely with international organizations of importance in the realisation of its objectives. Established in 1968, IFIA is headquartered in Geneva, Switzerland and recognized as a public utility organization by the Republic and Canton of Geneva.

For some years, Mr. Harald, Director of the Swedish Inventions Office in collaboration with Mr. Leif Nordstrand collected information and made contacts in other countries and worked quietly away preparing the ground for the formation of international inventors bodies.
The first Statutes were drafted on 27 June 1968, circulated prior to the conference and approved during the General Assembly meeting.

The first President of the newly established inventors' federation was elected to be Mr. W.A. Richardson, chairman of the British Institute of Patentees and Inventors. The vice presidents were Dr. F. Burmester (West Germany), S. Green (Great Britain), F. Pfaffli (Switzerland), H. Romanus (Sweden) and the chairman was S. Green (Great Britain). IFIA Secretariat was opened in 207 Abbey House, 2-8 Victoria Street, Westminster, London, and Mr. A. L. T. Cotterell, Secretary of the British Association was elected as the Secretary of the Federation.

The council of the Institute of Patentees and Inventors, London, gave a dinner on Thursday, 11 July at the Café Royal, Regent Street, London, to commemorate the inauguration of the new Federation.
The first bulletin was published in September 1968 including a message from the president declaring the objectives of the federation formation. The first international symposium on the situation of inventors was jointly organized by the International Federation of Inventors' Associations and World Intellectual Property Organization from May 21 to 24, 1984 in WIPO headquarters in Geneva. 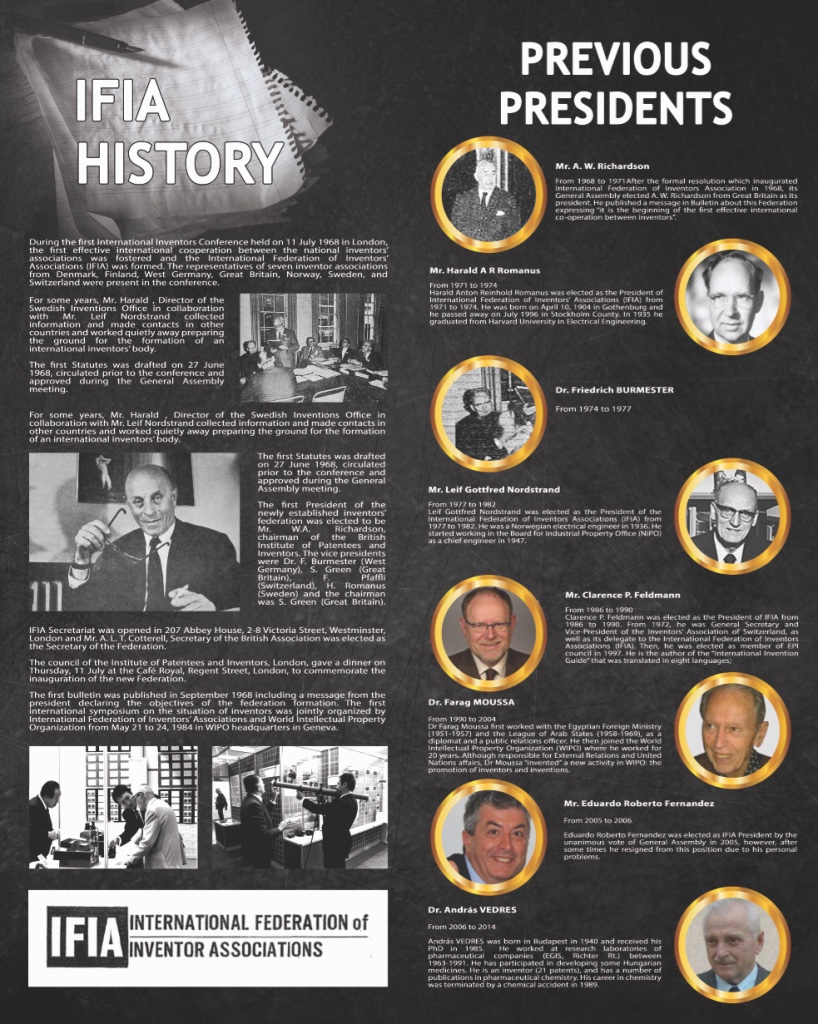