International inventors and innovators congress was held in Stockholm by International Federation of Inventors’ Associations (IFIA) and hosted by the Stockholm Innovators Association (STIK) as well as the Swedish Inventors’ Association (SUF) during 25-26 August, 2015. In addition to seminars, lectures and discussions on the conditions for innovation and invention, the conference and congress also resulted in an official statement in the form of five positions.

The International Innovation Conference and IFIA’s World Congress was conducted over two days in late August at the Stockholm International Fairs premises and had gathered a hundred participants, both national and international, to discuss the conditions for inventors and IFIA’s role regarding the issue. One conclusion was the need to address and correct the general misconception that inventions and innovations mainly originate from the academic world. This is common perception that many politicians all over the world seem to have and believe, which therefore tends to result in a relatively one-sided support and financing of inventions / innovations.

The congress also discussed the importance of acknowledging the world’s female inventors as an equally important group. Likewise it was emphasized by lecturer Winfried Sturm to embrace creativity as a key factor in development, both as an attribute and as an important subject, as well in school as in academic education.

In addition to the above topics, the following issues were also presented by distinguished lecturers:

Today, on September 9,  the presidential office of IFIA is announcing the five official statements, recently adopted by the IFIA World Congress. Two intense days of lectures and discussions resulted in the congress adopting five important official positions for IFIA to pursue and communicate which include:

If governments maintain the misconception that it is primarily the scientist who invents, thereby allocating most of its funding there, that will seriously diminish a nation’s potential for innovative growth. Identifying the inventor as the primary source of new technology, product development and industrial growth is a societal concern.

In very many countries, the thesis Triple Helix is presumed to be the working formula for innovation. With the facts, studies and testaments given at the IFIA congress, it is now confirmed that Triple Helix only remains a thesis, not a truth. It should therefore be abandoned as a basis for innovation strategies.

There is no difference in the quality of inventions made by women compared to those made by men. Nevertheless, female inventors and innovators have unfortunately by tradition and culture been much more invisible. Given that half of this planet’s inhabitants – consumers, workers and voters – are women, it is only natural for a modern age to also acknowledge them as equals in the field of innovation and inventing.

The execution of Alfred Nobel’s will, concerning the distribution of the physics prize must be revised, so that the balance between laureates for discoveries versus inventions mirrors the testaments exact wording, i.e. half of the laureates should be inventors, not just approximately 20%. 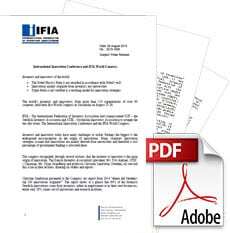 See the photo of the IFIA World Congress 2015.