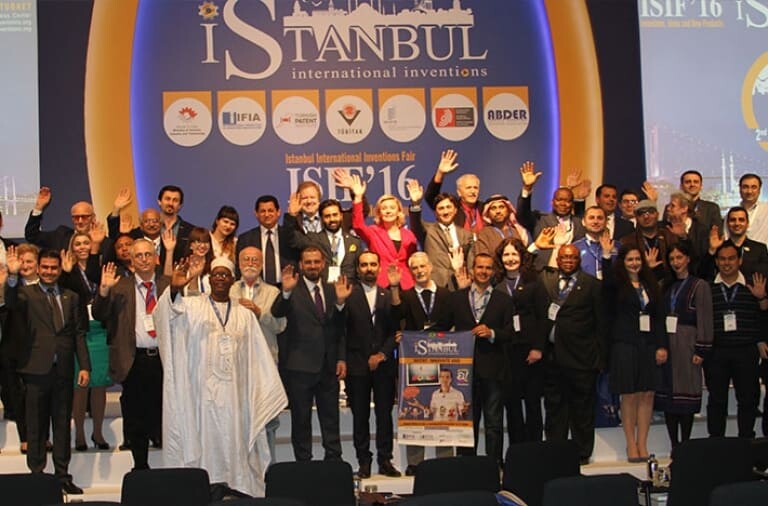 Having developed the theme of “commercialization” for 2016, IFIA orientated a major part of its activities toward realizing this objective. To this end, IFIA Second World Congress, organized on March 4 in Istanbul, Turkey alongside Istanbul International Invention Fair (ISIF), highlighted the measures to be taken for the “Commercialization of Inventions”.

Some outstanding figures such as Mr. Akash Bhavsar, chairman of UN ESCAP Task Force on Innovation and Competitiveness, Mr. Lee Joon-seok, President of Korea Invention Promotion Association and Deputy Commissioner of Korea Intellectual Property Office (KIPO) as well as Mr. Ömer HIZIROĞLU, Partner of Diffusion Capital Partners were invited to deliver a series of lectures on the subject of invention commercialization.

Meanwhile, the major highlights of Living Lab Model launched by SkyQuest to address challenges associated with implementation and adoption of new Innovations besides a global IP marketplace named IPRX (Innovation, Product, Research, and Exchange) bringing together diverse stakeholders, collaborators and global think-tank from the ecosystem were underlined.

Specific mention of the task force was made which aligns the goals of IFIA. Innovation and Competitiveness Task Force is committed to promote the active engagement of the diverse stakeholders of sector in addressing the issues of environmental sustainable and social inclusiveness in business besides extending its support in improving innovations and design capability in addition to accelerating commercialization of high impact innovations. This will enable leveraging on the innovation capabilities and creativity thereby bringing in new solutions to humanities grand challenges thus resulting into development and economic growth

Later, he explained how IFIA and its members can contribute to the global ecosystem and leverage on SkyQuest’s global resources, as well as tech exchange networks that are constantly in need of solutions and how IFIA inventions can be channelized through SkyQuest, IPRX and UN ESCAP Innovation & Competitiveness Task Force.

Mr. Lee Joon-seok initially highlighted the core activities of KIPA and its contribution to the nationwide proliferation of invention spirit. The organization of such events as the National Invention Day since 1957, Korea invention patent Exhibition and Seoul International Invention Fair raises awareness about the importance of innovation.

Afterwards, he illustrated the role that KIPA has played in the commercialization of inventions by developing business models and maximizing the value of IP by transaction.

Mr. Ömer HIZIROĞLU discussed the importance of intellectual property in the commercialization of inventions and the common mistakes made by the startups in identifying and maximizing their core IP assets.

He also elaborated that the best vehicle to bring innovative inventions to the market is through IP based Startups and that IP management should be in the DNA of startups.

Mr. HIZIROĞLU explained without proper strategy and execution, transition from idea to the market fails. In fact, Patents and inventions are an expensive exercise, if not managed, monetized, maximized (M3).

Securing patent protection was defined as the other key element for avoiding the failure of an idea. He recited Kevin Rivett’s saying «Innovation without protection is philanthropy».

Moreover, some of IFIA members addressed the same topic, making substantial contribution to the realization of congress goals.

Mr. Marcelo Vivacqua, President of International Brazil Innovative Inventors, Scientists and Entrepreneurs Association (ABIPIR), presented INNOVATIO (www.innovatio.com.br), a Platform of Inventions and Technology Transfer as a tool for Inventors which constitutes a digital ecosystem where all the actors of the innovation process from various Countries will be able to connect to each other facilitating the license, manufacture,  get partners, get funding, market and sale their inventions and innovations. Additionally, this platform enables the scientific and technological exchange between inventors, scientists, Researchers, Science and Technology institutions and Governments making the process of innovation more efficient, agile and profitable.

Mr Örjan Strandberg, Chair of the Stockholm Innovators Association, representing Swedens inventors, opened his talk stating that ‘innovation systems’ have a built in contradiction; innovating and creating rarely allows for systemization. Rather – as Google and the world’s most innovative companies will testify – the secret lies in attracting the five percent minority of serially creative individuals within a population, to become the human resource for the business.

Living in the middle of the Atlantic Ocean, Ms. Elinora Inga Sigurdardottir, President of Icelandic Inventors Association, attracted the attention of audiences to the obstacles caused for the inventors due to some factors like residence, age, gender, education, disability and the type of invention.

She also drew a comparison between the percentages of women owning a company, being granted the patent, accessing the capital to set up a business and that of men. It became clear that women own a larger proportion despite the existence of such obstacles as lack of role models, lack of access to venture capital, lack of access to high-tech networks, difficulties in becoming credible innovators in a male-dominated environment such as science and technology.

Ms. Sigurdardottir advised IFIA to establish an online marketing center convening the IP lawyers, investors, manufactures, and licensors in order to facilitate the sale or marketing of the inventions.

Mr. Mladen Karic, IFIA Executive Committee Member, noted three exiting problems and urged the innovators to make their contribution for eradicating the great civilization problems by conducting further research, using ethics and taking into account the possible consequences. The possibility of a nuclear disaster, equating the machines or robots with people in terms of intelligence, and genetic modification of organisms were pointed as the challenges.

He proposed the following measures as a solution to three above-mentioned problems:

· Introduce amendments to the legislation for protection of intellectual property, which would introduce or complicate the protection of achievements in these areas
· A biding statement by the author when registering a product that the implementation and application of his creation does not harm the human population and environment
· Spread information about the dangers that can be caused by uncontrolled research
· Initiate activities to devise codes, international rules and reliable control mechanisms at the global level action in these areas

Ms. Ana Hafner, the former President of Association of Slovenian Inventors indicated that according to the statistical data and studies, the number of patented inventions issued to men far exceeds that of women. However, the main reason for such a small percentage of women inventors derives from the patriarchal society which gives the men privileged position of the “creator”. However, the evidence based on information provided by members of the Association of Slovenian Inventors (ASI) reveals that though there are only few women inventors, they are more successful than men in the sense of invention commercialization.

Finally, the congress led to the establishment of the following statements:

1.      SkyQuest and IPRX are recognized as two platforms of global commercialization
2.      Transfer of idea to market requires proper strategy and execution
3.      It is acknowledged that transfer of technology is facilitated via INNOVATIO
4.      The factors like place of residence, gender and education affect the success of inventions
5.      Civilization problems will be eradicated by establishing appropriate codes of conduct
6.      Statistics shows women inventors are more successful than men in commercialization
7.      Societies must recognize that innovation and creativity is the product of an approximately 5% minority in a population.

Here you can see the photo of the World Congress 2016, Istanbul.