Young inventors always play a big role at the iENA. Every year students show an enormously high innovation potential and inspire visitors and representatives of the economy.

Since 1996 the German youth science contest Jugend forscht has presented more than 60 projects at the iENA. The initiative considers the training and support of young people in science, technology, engineering and mathematics (STEM) to be a decisive task for guaranteeing the sustainability of our society. Jugend forscht makes an important contribution to identifying and supporting the highly gifted people we need in business and academia. 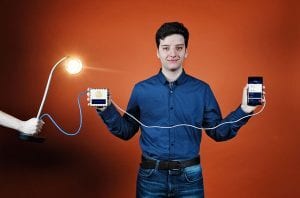 At iENA 2017 Alexander Riebau and Thorben Bartzsch showed the Intelligent Sprinkler System they developed together with Gregor Seyeda, which extinguishes fires in a targeted way.

In his work, Nils Lüpke focused on the so called “Internet of things” which allows the networking of electronic devices in one’s own home.

Robin Lauerer constructed a digital alternative to the usual blind person’s cane: a software-based handy aid to help blind or visually impaired people to find their way around safely and independently.

At the iENA 2017, pupils from the Fürstenzell Maristen grammar school again presented their inventions as they have done for many years now. Known as the inventor school, in 1983 this school was the first world wide to introduce the elective subject of inventing.

Inventing itself is learnt by the pupils both by developing their own inventions according to the motto “learning by doing”, and by following the development of inventions of other pupils, through which the experiences of these also become their own. Many of the former inventor pupils can show a large number of prizes and awards when applying for jobs, which has often shown to be a door opener for a technical career.

“At the beginning it’s an idea – at the end a great invention!”

Teams of pupils from the mikromakro Baden-Wuerttemberg Foundation program were presenting under this motto at the leading international trade fair for inventors last year. With mikromakro, the Baden-Wuerttemberg Foundation motivates teams of pupils to find clever solutions to problems, develop new products and implement them in a practical way over a period of two years. The know-how that is important for the implementation of the project is supplied through workshops on the subjects of creativity, project management, marketing, technology and patent rights as well as specially developed guidelines. 3.200 pupils with their teams have participated in the program so far.

Creative ideas from the Zukunftspiloten (“Pilots of the future”) 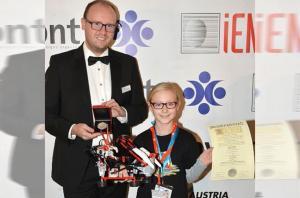 The pilots of the future regularly try out new things, venture on experiments with unusual ideas and think the world one step further – to perhaps make it a bit better. The VDI (Association of German Engineers) youth club shows that technology offers many solutions for social problems and motivates proactive thought. At the iENA 2017 the Nuremberg VDI pilots of the future presented themselves with their ideas and demonstrated exciting technical and scientific projects such as, for example, a 3-D printer constructed and calibrated by a young person, a LEGO mindstorm robot or an autonomous vehicle developed, constructed and produced personally.