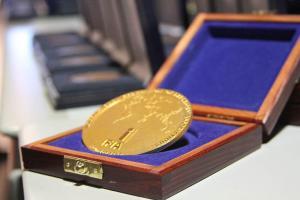 IFIA Best Invention Medal is awarded to the greatest invention in the invention festival, competition, and exhibition relying on the IFIA’s Jury evaluation of its novelty, inventive step, patent, the potentiality to be commercialized, its benefit for the mankind and etc. Best invention medals are awarded in various events held under the patronage of IFIA.

Meanwhile, the below criteria is utilized by IFIA International Jury Board to assess the inventions:

2. Is the invention green or eco-friendly?
The invention is evaluated considering its impact on the environment. In case the invention causes pollution, 0 will be granted to it. 1 is considered for an invention that does not cause any pollution. Regarding the extent of mitigating pollution, the jury should allocate a number between 2 to 4.

5. Is there a public demand for the invention?
The popularity of invention should be estimated by the jury. If the invention is seasonal or it can be used in limited geographical territories, the lower score will be devoted to it.

7. Is the invention more useful than the existing products?
Depending on the extent of innovation used in the invention in comparison to the available products in the market, a score within the range of 0 to 4 must be granted to the invention.

9. Is the invention ready to be commercialized?
The possibility of invention commercialization shall be evaluated and rated by the Jury between 0 and 3. In case it has the Feasibility Study Report, the score of 4 must be considered for it.