IFIA structure depicts the structure of the organization, different departments, and the relationship between its parts developed according to the Statues. As illustrated in the chart, the General Assembly is at the head of the organization authorized to elect the President and Executive Committee members. President administers the financial and official works with the help of the honorary president, directors, and advisors.

General Assembly:
To nominate the Honorary President and to elect the President as well as the Executive Committee members. The election takes place through anonymous voting cards that voters put in the ballot box. Full members are liable to officially introduce presidential candidates to the General Assembly.

To approve the criteria proposed by the Secretariat for the election of the President and Executive Committee members.

Shall appoint one or more persons as IFIA Directors and Treasurer.

The President and such person(s) as Vice President, Directors, Secretary(ies), Treasurer, Advisors and any other person the President deems necessary shall constitute IFIA Secretariat.

The Treasurer shall assist the President in managing IFIA financial affairs.

The departments are committed to realizing organizational objectives within the responsibilities determined for them. 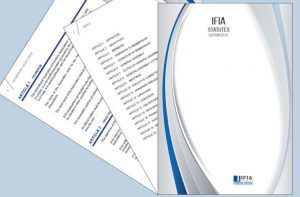