The 14th Al Bassel Fair for Invention & Innovation was a great publicity of the creativity and innovation in Syria. The exhibitors from 20 countries (IFIA organizations from 12 Arabic and 8 non Arabic countries) assisted the Syrian inventors to call to the attention of the Arabic society and Governments the importance of inventive activity in overcoming the ongoing crisis. 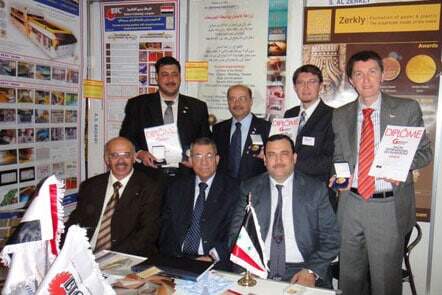 The event was organized in Hall 2 of the new Damascus fair ground under the patronage of Ministry of Economy and Trade. The participation of outstanding figures such as Dr. Amer Hosni Lutfi, the Minister of Economy and Trade, Mr. Francis Gurry, WIPO Director General and high position representatives of the League of Arab States contributed to the greatness of the event. IFIA Cup, IFIA ECO Prize, IFIA Lady Prize, IFIA Scientific Medal and IFIA Innovation Medal was awarded in the related categories during the event. Click to find the presidential report about the fair.

The 14th Al Bassel Fair was a true manifestation of inventive activity in the Middle East due to the activity of the IFIA members from 12 Arabic and 8 non Arabic countries. IFIA organized informal Executive Committee meeting on 18 July at 6:30 p.m. connected with Al Bassel. Click to find the meeting details.