The sixth International symposium on “Inventors, inventions and information” was jointly organized by the World Intellectual Property Organization (WIPO) and the International Federation of Inventors’ Associations (IFIA) with the cooperation of the European Patent Office in Vienna from April 11 to 14, 1994 at the premises of EPO.

Several aspects of the main theme were examined, namely: 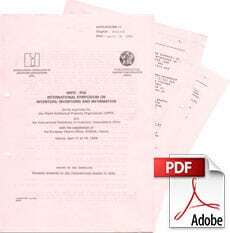