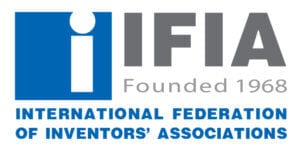 The IFIA logo was designed in July 1968. The IFIA logo consists of an original word meaning ( I ) which means inventor, innovator, invention, innovation, idea, and Intellectual Property.  The (i) word is inside a square that means home, and the purpose of this house is the IFIA.

IIGEn order to protect the name and logo of the International Federation of Inventors’ Associations throughout Switzerland where IFIA Headquarters is located, we managed to register the name and trademark of IFIA at the Institute of Intellectual Property of Switzerland under the registration number of 687082.

During the first International Inventors Conference held on 11 July 1968 in London, the first effective international cooperation between the national inventors’ associations was fostered and the International Federation of Inventors’ Associations (IFIA) was formed. The representatives of seven inventor associations from Denmark, Finland, West Germany, Great Britain, Norway, Sweden, and Switzerland were present in the conference

enthusiasts, inventor associations, invention exhibitions, innovative knowledge, and cooperation. International Federation of Inventors Associations is a nonprofit organization aiming to disseminate the culture of invention and innovation support inventors transfer technology and establish cooperation with the related organizations.IFIA cooperates closely with international organizations of importance in the realisation of its objectives. Established in 1968, IFIA is headquartered in Geneva, Switzerland, and recognized as a public utility organization by the Republic and Canton of Geneva.